The official and correct name of the university is Comillas Pontifical University. As such, we ask that the media uses this name to refer to the University, at least at the beginning of all reports, and that the abbreviated name "Comillas" is used for all subsequent references.

Since the length of the official and correct name could be a problem in news titles, we suggest using the name Comillas University, yet strictly as a last resort.

ICAI and ICADE are historic brands that are widely recognized and valued in their own right. They originate from education centers which became part of Comillas Pontifical University and that now form part of its School of Engineering and its faculties of Law and of Economics and Business Studies, respectively.

In order to help the general public identify Comillas Pontifical University and the relevant educational bodies that form part of the university, while also upholding the right of this institution to its full identity, we ask the media to use, where necessary, the following abbreviations:

ICAI Comillas, and never just ICAI, when the information in question refers expressly to this part of the university, whose official name as an academic center is currently ICAI School of Engineering of the Comillas Pontifical University.

Comillas is a university run by the Society of Jesus, an Order of the Catholic Church which manages over 90 universities and 500 schools all over the world.

The university of today can be traced back, on the one hand, to the ecclesiastic university commissioned by Pope Leo XIII in 1890 in the town of Comillas, Cantabria, which was run from the very beginning by the Society of Jesus. On the other hand, the university also has its roots in two institutions established in Madrid by the Jesuits: The Catholic Institute of Arts and Industry (ICAI), which opened in 1908, and the Catholic Institute of Business Administration and Management (ICADE), established in 1956.

After the ecclesiastic university moved from Comillas to Madrid in the 1960s, the Society of Jesus found it had two complementary higher education institutions in close proximity to each other in the capital of Spain and decided to integrate ICAI-ICADE into the university.

Comillas is an academic institution that is fully integrated into the Spanish university system under the agreements drawn up between the Vatican and the Spanish State, and its official degree courses have all been granted full civil effects.

Programs adapted to the EHEA:

Programs prior to the EHEA reform:

According to its Institutional Declaration, COMILLAS accepts and endorses the following definition of a University set forth in the "Magna Charta Universitatum", signed in Bologna in 1988: "... an academic community that, in a rigorous and critical manner, contributes to the protection and development of human dignity and cultural heritage through research, teaching and providing a diverse range of services to local, national and international communities".

As a Catholic university, Comillas "aims as a not-for-profit institution -as expressed in its University Statues- to serve as an institutional bridge between Christian ideals, as expressed in the Gospels, and all forms of cultural expression in order to promote dialog and exchange. Comillas promotes teaching and research activities in line with the methodological and substantive requirements for all university institutions and welcomes and encourages feats of human spirit in the field of science, technical progress and arts, seeking to be a leavening force on culture, human value, life and society, while contributing to the message of Jesus Christ". 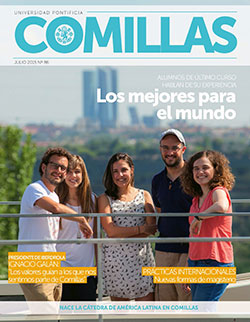 Juan Manuel Daganzo
Responsible for Media Relations
Tel: +34 91 542 28 00 (ext. 2475).
Email: This email address is being protected from spambots. You need JavaScript enabled to view it.

The Communications Office is part of the Corporate Marketing Service of Comillas Pontifical University.