Submission of applications:
Not offered as an individual program.

The Bachelor's Degree in International Relations is designed to produce professionals who are capable of grasping the reality of international relations in an increasingly interdependent world and who can analyze, design strategies and make decisions in various associated professional fields.

Comillas does not offer this degree as an individual program, but rather in dual format combining a second Bachelor's Degree.

Each of the four combined programs is geared towards varying professional profiles and each one, therefore, comprises training that is more directly aimed at major professional environments. 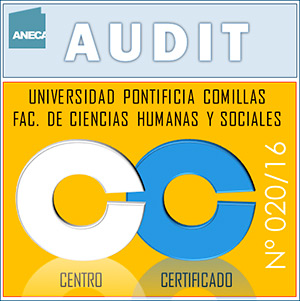 The applicant profile of the Bachelor's Degree in International Relations corresponds to individuals who are interested in intercultural communication, history and current world affairs; who have an excellent level in the Spanish language and a high level in their first foreign language (English); who are interested in improving or learning another language and who  stand out for their intellectual curiosity and interest in the world around them.

The admissions tests involve sitting exams to assess the common knowledge acquired through secondary and pre-university education subjects and a language exam.

The admission of applicants is determined by the results obtained in these tests with the following weighting: the general knowledge exam, 33%; the English language exam, 33% (students are required to have the B1 level, corresponding to the Common European Framework (CEF)); and the weighted average grades of the last academic years studied by students in the 3rd and 4th years of Compulsory Secondary Education and the 1st year of pre-university education preparation courses.

The curriculum comprises 52.2 ECTS of elective courses. In order to reinforce the interconnection between the diploma's objectives and the academic training objectives, and taking into account the career prospects, courses are organised in Specialization Concentrations To obtain the corresponding Concentration in "Law and Diplomacy", "Economics and Business" or "Foreign Policy and International Security", the student must take at least 30 credits from the same concentration.

Specialization concentrations are the following:

The content structure of the Bachelor's Degree in International Relations largely corresponds to the knowledge areas covered through an interdisciplinary syllabus for the competitive Diplomatic Service exams (last held in 2010 with 201 subjects): Public International Law, Private International Law, Civil Law and Commercial Law, Socio-political Systems, Constitutional Law, Administrative Law, International and European Union Bodies, Economic Theory, the World Economy, the Spanish Economy, the Economy of the European Union and Development Cooperation, Sociology, Modern and Contemporary History, International Relations and Foreign Policy. The specific modules in this concentration reinforce the knowledge of the Spanish, community and international legal systems, in both their private and public strands. In addition, they encompass aspects directly related to the legal foundations as well as the theory and practice of diplomacy. The Law and Diplomacy Concentration therefore provides reinforced training for those who want to prepare for the access exams of Diplomatic Service and of community and international bodies, which also hold in high regard an advanced level of practical language skills in at least two foreign languages.

The modules covered in the Foreign Policy and International Security concentration address the most crucial issues on the current international agenda, directly or indirectly related to peace and international security matters. They cover the analytical skills of the complex realities that shape the so-called new points of conflict (jihadist/international terrorism, the competition and fight for energy and natural resources/marine communication channels, regional conflicts, migratory flows, proliferation of weapons of mass destruction, etc.). They also include the foreign policy of the main international players, both regarding these conflicts and the analysis of their aims and the steps to achieve them in international negotiations, gearing this training towards the professional profile of international analyst.

The curriculum comprises 52.5 ECTS of optional modules. To reinforce the interconnection between the objectives of the degree and the training for different professional prospects, the modules are organized by study plans. To obtain the Concentration corresponding to "Law and Diplomacy", "Economics and Business" or "Foreign Policy and International Security", students must choose at least 30 credits from the same study plan.

The modules that comprise the Economics and Business concentration, as well as the skills acquired in the compulsory part of the Bachelor's Degree in International Relations, will prepare students to make an instrumental contribution when assessing the so-called political-legal, socio-cultural, economic and technological macro-environment that determines business activity anywhere in the world. In this context, the specific additional training on key elements of international business management that students acquire in this concentration will empower them to decisively participate in strategic and risk assessments, as well as business decision-making with regard to expansion into new markets, relations with foreign business associates or the management of international and institutional relations of companies in other countries. As such, the concentration focuses on preparing students for working in the field of transnational business or economic-related bodies and institutions.

The Bachelor's Degree in International Relations provides graduates with adequate personal and professional skills to understand the reality of international relations in an increasingly interdependent world and to analyze, design strategies and make decisions in various associated professional fields.

The skills acquired throughout the first cycle of studies, particularly the extensive and comprehensive knowledge of different factors that explain the complexity of current international relations, the skills to apply such knowledge to diverse circumstances and situations, and the training in the linguistic and cultural tools required in a labor world that, by definition, crosses borders, converts International Relations graduates into professionals with a profile that can be applied to all professional sectors akin to international relations - political and institutional, economic, legal or cultural.

The studies of the Bachelor's Degree in International Relations correspond, therefore, to a wide range of professional profiles. The degree training provides the necessary and adequate skills to pursue a future career in the following positions:

To bolster training in light of different professional prospects, the optional modules, which represent 52.5 ECTS, are organized in the following three study plans which, if 30 credits are obtained, lead to the corresponding Concentration being acquired:

Law and Diplomacy is designed to more intensely train those wanting to prepare for the access exams of Diplomatic Service and of community and international bodies; Economics and Business for those choosing to focus on roles in transnational companies or, likewise, on preparing to access economic-related international organizations; and finally, a Foreign Policy and International Security Concentration that directs the focus of the degree closer to Political Sciences and the associated professional prospects.

In the fourth academic year, students carry out a compulsory external internship, representing 6 credits. The internships are academically supervised and undertaken in selected entities in the professional environment relating to the degree. These entities include public administration bodies with international outreach, the Ministry of Foreign Affairs, international bodies and those in the international business environment. This internship can be preceded by an optional internship in the third academic year, representing 6 credits.

The aim of this internship experience is not just to test the knowledge and skills acquired. The chance to meet future employers, to experience group dynamics and to learn in a company structure are all equally important factors. Comillas Pontifical University's tradition of gearing training towards practice and employment, along with an extensive network of contacts and internship agreements, makes it possible to offer fourth year students an extremely varied and attractive internship list, both in Spain and abroad. Some of the entities that offer internships to International Relations students, under the module framework of International Relations Internships of the 4th academic year, are:

The benefit of student exchange periods has been clearly evident, on both an academic level and a linguistic and personal one, throughout the long-running experience of the Sócrates-Erasmus program. This benefit is amplified in a training program that is defined as international, both in its content and professional profiles, as is the case of the Bachelor's Degree in International Relations.

The University offers students the option to study one academic year abroad in another European or Non-European university partner, where study programs are similar to those covered in this academically recognized curriculum.

Students will take advantage of exchange agreements with over 40 prestigious universities in Europe, Asia, America and Australia.

Faculty of the Bachelor's Degree in International Relations