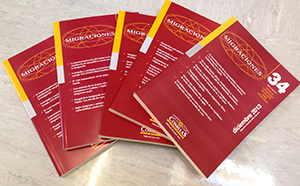 MIGRACIONES [MIGRATIONS] is a multidisciplinary journal specializing in international migratory issues, particularly those related to Spain. It was founded in 1996 by the University Institute of Studies on Migration at Comillas Pontifical University with the aim of offering academics in the field of Spanish migration a place to publish their work. Since then, thanks to its readers, the Spring and Autumn editions have continued, enabling the journal to become, both in Spain and abroad, an indispensable benchmark for issues of this nature.

Faithful to its beginnings, when it was known as an open space for intercommunication between those passionate about international migration, MIGRATIONS continues to welcome the collaborative pieces that are sent in.

The Scalabrini International Migration Network (SIMN) is a non-profit organization founded in 2006 to safeguard the dignity and rights of migrants, refugees, seafarers, itinerants and all internationally displaced persons. This publication comprises four studies concerning the definition and implementation of public policies and the role of civil society in four Latin American countries: Bolivia, Chile, Paraguay and Peru. 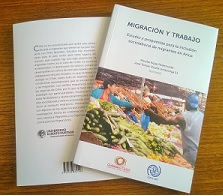 This book describes the connection between migrants and labor abroad. A condition which, in other words, according to the human condition of Hanna Arendt, is only possible in active life, and is therefore comparable to an indissociable whole comprising labor, politics and the transcendent culture

However, unlike the notion put forward by Arendt when she states that politics always prevail over the physical labor of the artisan and the worker; the authors of this book allow us to imply that, it is thanks to labor that citizen and political practice are becoming possible. Through labor, the foreigner not only obtains resources for their livelihood, but also gains respect for becoming a democratic member of society. It is through labor that the status of the foreigner is civilized and is made part of the political endeavor. 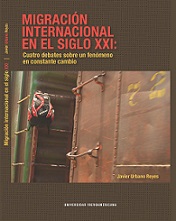 Research on international migration is a constant work in progress, both in terms of the diagnosis as well as in the interpretation. Every time that specialists attempt to address transnational mobility, new analysis variables and weighting factors emerge, making this a phenomenon which is particularly evasive of generalizations and universal explanations. However, the reality itself fosters the establishment of a minimum interpretation space: violence against migrant populations, institutionalized exclusion policies that the State implements against immigrants and the presence of organized crime that has created, from human mobility –particularly the undocumented variety–, a market for trafficking which urges us to produce basic converging criteria between analysts, civil society organizations and the state system. The aim must entail the creation of a policy that refines the principle of national priority (first nationals and then foreigners) and that in some way resists migratory control strategies, in order to more effectively deal with the vulnerable status of migrants.

This work aims to contribute to discussions on how to assess the migrant concept. It seeks to establish a stance against contentious issues regarding remittances and their –possibly misconstrued– link with development processes; and it also aims to reassess the role that must and should be safeguarded by international regulations on the protection and promotion of the human rights of these persons.

Venezuela lives today a social phenomenon unprecedented. A country of immigrants has become one of emigrants and exiles. The 1960 census revealed that 15 % of the population consisted of immigrants who came mainly from European countries. That percentage increases in the decade of the 70s and 80s, thanks to the contribution of immigration from Latin American countries. Venezuela was a democratic haven for those fleeing the Colombian and Peruvian armed gangs , political and economic instability in Ecuador and Central American and Caribbean countries and dictatorships across the Southern Cone.

Argentina is a country of immigrants, but the emigration of Argentines has gained significant importance. This book presents a sociological study on emigration of Argentineans to Spain between 1970 and 2010. Thus, covers a complete cycle that began with the exile and closed four decades after the return of emigrants. The study focuses especially on the demographic             composition of migration flows and migrant population in their motives for moving and their economic integration into destination. The results indicate that there is a group of Argentines in Spain "old" and with heterogeneous demographic characteristics, that emigration was motivated by losses of different nature and intensity, but also unfulfilled dreams or damaged; and insertion into the labor market was mixed, resulted in misery but also brought opportunities to translate ancient longings and new expectations. 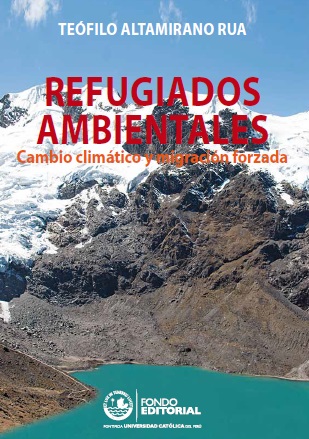 The biggest impact that climate change is occurring on the population. One consequence will be involuntary and compulsive  mobility, which influences and influence land use planning, resource and new policy responses national and local governments.   The populations that are most affected are the poorest in the country and major cities. Currently, it is estimated the number of climate migrants in fifty million. In addition, 135 million are threatened by desertification and chronic water shortages. The fifty million climate migrants mentioned have already exceeded the number of internally displaced persons and refugees by military  reasons. For ethnic and religious conflicts and those displaced by natural disasters and political conflicts, which together, and  according to the same authors. 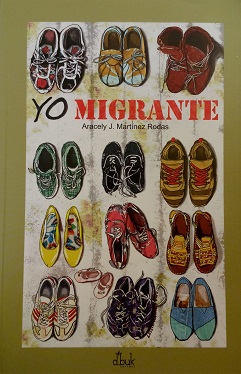 At 31 stories written in the colloquial language of the migrant and made ​​from personal interviews, anthropologist Aracely Martinez meets adventure of feelings and passions with the reasons Guatemalan men and women has led them to migrate to other lands: The quest for a better life than their homeland have been denied.

Aracely begins by noting that the major motivational differences of migration, always meet in a search for something; so that in each story, step by step follow the facts, details, ideas, thoughts and emotions that were taking place in each migrant along the migration path and the place of destination, gathering the stories and the cold breath of fate with the dawn of a whole new world.

Suggestive, rigorous, allusive and sobering, it becomes narrative. This book is a foray into the field of consciousness of the migrant, must for those interested in the mystery of feelings, emotions and reasons to move to look for life on other countries reader. The author dissects each life story, narrated by the character himself at a time when it has unleashed what she calls "The immigration crisis that has emergency in Central America "

Throughout the book I Migrant, with astonishing acuity, but incisive and entertaining, the reader can penetrate the complex dimension of the migrant and his behavior and a clear picture of what is migration and the difficulties of adapting to a new life, difficulties sometimes humorous but others of suffering and pain; all it shows us a world of which we have only vague ideas. 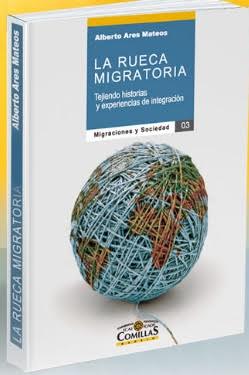 What do migrants think of their own integration process? The Migratory Spinning Wheel. Weaving Stories and Experiences of Integration, accompanies the life, histories, and lifestyles of diverse communities - Ecuadorians in Madrid, Salvadorans in Boston and Moroccans in Valladolid - presenting a proposal, the mixed integration model that reconcepts three types of behaviors, or even icons of people in the process of incorporation: assimilationist, multicultural and project.

The spinning wheel has a symbology that goes back to the history of humanity, like the same migratory processes. A history of humanity that we can not trivialize, simplify or minimize. The metaphor around "weaving stories" and "integration experiences" encourages us to put our capacities to plunge into human complexity, allowing people to connect with their own reality, their own diversity and their own roots.

From this perspective, the proposed model suggests that there would be as many processes of integration as people who emigrate. No process of personal integration is equal to the other. It is possible to give certain similarities between individuals in the process of incorporation, it is possible to arrive at the intuition or forecast, based on their environment and their circumstances, a certain diagnosis of integration, but it will never be possible to determine with certainty what the final result of the process. As a recommendation, five proposals are put forward: the need to address and manage diversity, promote inclusive citizenship and access to basic rights, the importance of education and leadership training that will boost the construction of social cohesion, caring for cultural elements within celebratory family and community traditions, religious devotions as potent elements of identity and sense construction; and the importance of the empowerment and promotion of women as a powerful catalyst and social transformation agent. 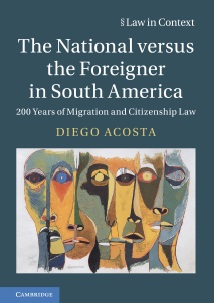 Since the turn of the century, South American governments and regional organisations have adopted the world’s most open discourse on migration and citizenship. At a time when restrictive choices were becoming increasingly predominant around the world, South American policymakers presented their discourse as being both an innovative and exceptional ‘new paradigm’ and part of a morally superior, avant-garde path in
policymaking. This book provides a critical examination of the South American legal framework through a historical and comparative analysis.
Diego Acosta uses this analysis to assess whether the laws are truly innovative and exceptional, as well as evaluating their feasibility, strengths and weaknesses. By analysing the legal construction of the national and the foreigner in ten South American countries during the last two centuries, he demonstrates how different citizenship and migration laws have functioned, as well as showing why states have opted for certain regulation choices, and the consequence of these choices for state- and nation-building in the continent. An invaluable insight for anyone interested in global migration and citizenship discussions.