The Individual as a Person at the Center of Digitizalization

Carme Artigas, the Secretary of State for Digitalization and Artificial Intelligence, was responsible for closing the lecture series

In order to address the growing importance of digitalization in the post-Covid-19 era, the Comillas-ICAI Chair for Smart Industry organized the lecture series “The Person at the Center”. (“La persona en el centro”, in Spanish). Throughout the four sessions, the CEO’s of the sponsoring and participating companies of the Chair addressed issues such as Mobility, Cybersecurity and Augmented Reality.

Raúl Blanco, Secretary General for Industry and SME’s, of the Ministry of Commerce, Industry and Tourism, participated in the opening round table on November 3, and pointed out the importance of carrying out an industrial investment focused on SMEs. Also participating were Bernardo Velázquez, CEO of Acerinox, and Jesús Pascual, CEO of Grupo Antolín. Velázquez pointed out that "Companies have to be tremendously flexible, and should be able to predict all situations and react very quickly; they must be agile enough to make decisions and adapt to new situations, as well as to short supply chains, being capable of reacting to these needs"..

"At Grupo Antolin we are applying the full potential of digitizalization to cross-train any activity and department as long as added value is provided at a reasonable cost," explained Pascual.

In attendance at the round table on November 10 were Marc Gómez, CEO and President of ABB Spain, Eduardo López-Puertas, CEO of IFEMA, and Juan de Navascués, CEO of Saargummi Ibérica. Gómez pointed out that "There is no alternative; we all have to be up-to-date continuously, without waiting for the new generations to arrive." López-Puertas, in his intervention, recognized that "talent, strategy and flexibility are the keys to digitalization." In the opinion of Navascués, "it is the person, the individual, who adds value to technology."

Marcelino Oreja, CEO of Enagás, Fernando Abril-Martorell, Chairman of Indra, and Enrique Ramírez, CEO of Pladur, participated in the session on November 17. Oreja insisted on the need to "train people in those issues that are necessary for the future." Along the same lines, Abril-Martorell emphasized the value of technology and digitalization to increase the productivity and competitiveness of companies and industries. Ramírez stressed that "the greatest challenge of digital transformation is the resistance to change."

The person in charge of closing the cycle on November 24 was the Secretary of State for Digitalization and Artificial Intelligence, Carme Artigas, who was accompanied by the President of IBM Spain, Portugal, Greece and Israel, Horacio Morell, and by the Executive President of Gestamp , Francisco J. Riberas.

During her speech, the Secretary of State reminded the audience that “Digital Transformation is one of the greatest challenges for our country, and also presents an historic opportunity. The pandemic has reminded us that, what was important before, has now become urgent. Thanks to digitalization we have been able to maintain economic activities. We have moved forward by assimilating years of advancement in a short time”.

Morell pointed to training as the key, and stated that “technology will accelerate our ability to discover”. Riberas pointed out that “Industry 4.0 has to be green, sustainable, and digital, as well as inclusive ”.

In attendance at the closing ceremony were the Rector of the University, Julio L. Martínez, SJ, and the Vice-Rector for Research and Internationalization and Co-Director of the Chair, Mariano Ventosa, along with Co-Chair Bernardo Villazán. The Rector emphasized the idea of the Covid-19 crisis as an opportunity: "The pandemic has put humanity to the test, in a challenge that is also an opportunity to put the common good on the horizon of all efforts." And as Mariano Ventosa pointed out, “The main challenge for the University in this new Industrial Revolution is to adapt and bring itself up-to-date at the same speed at which contexts are changing. 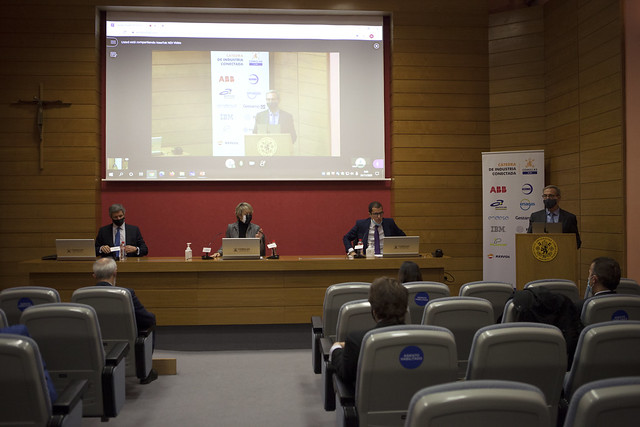