Winners of the Fourth Hackathon for Smart Industry

The Comillas-ICAI Chair for Smart Industry (CIC, in Spanish) organized, together with Prosegur, the sponsoring company, the Fouth Hackathon for Smart Industry, which was held in an on-line format this year. More than 50 participants, divided into eight teams, worked to provide an innovative response to the real challenge posed by the Area for Innovation at Prosegur: how to improve the efficiency of cash management of its “Prosegur Smart Cash” devices.

Each team put its skills into practice and enjoyed the support of diverse professionals from the company for the purpose of solving all of their doubts. After the designated work time, the solutions were submitted to the jury, which evaluated all of the proposals and selected the best of those presented.

Participating on the jury were Carolina García Cortes, José Daniel García Espinel, Felipe Gómez, Juan Estalella Girón, all experts from Prosegur, and Enrique Fernández Puertas from Repsol, as an independent expert. They announced the following winners at the end of the day:

The Awards Ceremony was attended by the winners, along with José Daniel García Espinel, as a representative of the jury, Bernardo Villazán Gil, Co-Director of the Chair for Smart Industry at Comillas-ICAI and Pablo García González, Director of Postgraduate and Doctoral Studies at Comillas-ICAI . During the ceremony, José Daniel García Espinel informed students of Prosegur's plans to continue working with the students in order to implement several of the solutions proposed. 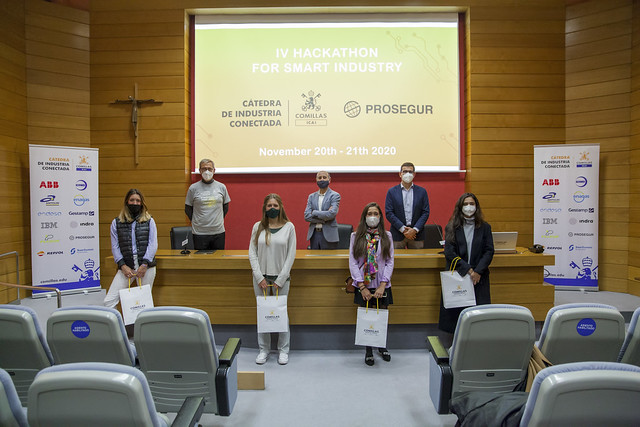