A competitive and fair energetic transition

A new Breakfast with CEO, organised by the Chair for Smart Industry with Josu Jon Imaz, Managing Director of Repsol

Josu Jon Imaz, in the Breakfast with CEO session

The Chair of Smart Industry organised a new “Breakfast with CEO” session. On this occasion, the guest was Josu Jon Imaz, Managing Director of Repsol. In his presentation, he highlighted that, in order to tackle the reduction of CO2 emissions, “we need action, ambition and a great deal of technological humility, because we don’t know which the solution will be". Following this line, he declared that at Repsol they are firmly committed to reducing emissions, an objective they achieve by promoting a wide range of different measures aimed at both reducing the carbon released to produce each unit of energy and capturing the excess of carbon in the atmosphere as a result of economic activity.

Among his reflections, Imaz stated that, on the path to keeping global warming below two degrees Celsius, “there is room for all energies.” The Managing Director of Repsol was optimistic, highlighting that from 2014 to 2016 the world’s GDP has been increased without significantly increasing CO2 emissions. Indeed, speaking about the Spanish case, Imaz considers that both the Spanish economy and the society “are doing their homework” in the process of decarbonisation, as Spain is below the European Union average. Nevertheless, “meeting the objective requires an effort as a society and as a country,” said Imaz, who indicated that “a debate which deals with decarbonisation by seeking the most efficient and profitable path is needed.”

The breakfast was attended by the Rector of the University, Julio L. Martínez, SJ, who welcomed the speaker, the rest of the representatives of the Chair’s sponsoring companies and a large number of company directors. The Rector reflected on the importance of the common good and encouraged all the attendees to transform these reflections on the common good carried out within the academic sphere into concrete actions that will improve society. 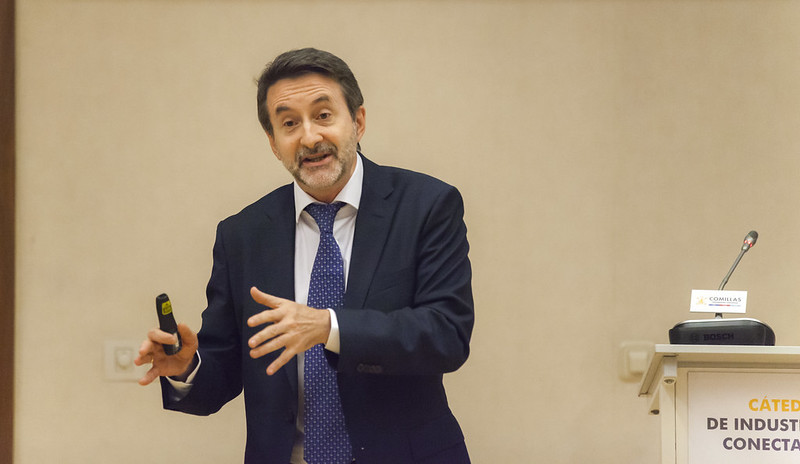