The Chair of Energy and Poverty participates in the Seminar: “Energy poverty in Europe-drivers and solutions” ”, CEER (Council of European Energy Regulators)-FSR (Florence School of Regulation)

The Chair of Energy and Poverty participates in the Seminar: “Energy poverty in Europe-drivers and solutions” ”, CEER (Council of European Energy Regulators)-FSR (Florence School of Regulation) 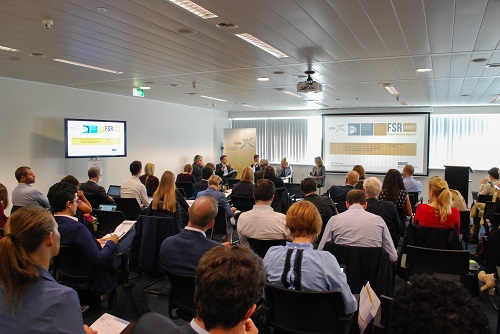 The objective of this workshop was to highlight the role of the regulators in tackling energy poverty in Europe.

The first panel explored the drivers of energy poverty and the role of the governments in addressing it. Bart Vereecke, EU Acer agency, focused on two main topics: cooperation and retail consumer protection. He believes that social tariffs and governments policies could help energy poor people improve their living conditions. Chryssa Argyriou, DG ENER, exposed the three main UE suggestions to fight energy poverty: Energy Efficiency, Government’s directives and Electricity directives. She discussed Energy regulation, energy affordability and lack of information as the three main issues. Lara Blake, DG JUST, talking about the data of the 40% of European citizens who rent their house, suggested that “Members states have to find regulations for house holders to improve actions against energy poverty”. She also talked about the EU energy efficiency campaign in the states most affected by this kind of poverty (Portugal, Greece, Romania etc.). This initiative aims to spread a culture that promotes the change in consumers’ behavior and governments’ actions to improve the life conditions of the citizens. Jean Michel Glachant, FSR Director, stated that competition in the energy market is extremely important to reduce the energy prices.

In the second panel, the conference speakers analyzed the solutions to end energy poverty in Europe and the opportunities offered by the Clean Energy Package. Dirk Vansintjan, REScoop, informed us that consumers pay the 90% of the cost of energy transition but the citizens own, for example, only the 4% of the wind turbines. Jake Beavan, Citizens Advice (UK), has exposed the UK fuel poverty strategy, stressing that the “Safety Net” against grid disconnection guaranteed the poor citizens access to energy. Sébastien Dolige, Eurelectric, stated that a structural issue in the energy bill is the high fixed cost (taxes and other items) and that the cooperation with the social field is crucial to achieve tangible results in the fight against energy poverty. Anne Vadasz-Nilsson, CEER, discussed the change in society and energy market and that the digitization could be a problem for elderly and poor people (information poverty). She stated that the humanization in UE and different governments’ actions (well-functioning market policies, energy efficiency etc.) could help the energy poor.

The third panel explored the energy poverty in the world. Pippo Ranci, FSR, believes that governments have to take common statements to tackle the lack of access to Energy and Energy Poverty. Sharon Darcy, Sustainability First, hypothesized that more flexible policies, energy efficiency and collaboration among the involved parties can help the energy poor; but this is not an easy challenge because “vulnerability is different in different conditions”. Stefan Bouzarovski, EU Energy Poverty Observatory, has presented the New Agendas at the research and policy interface, exploring the problem of energy poverty in its two complementary aspects: affordability and access to energy sources. He pointed out that politicians tend to individualize the problem, but “we need to talk about community: How can you address an entire group of citizens?”. Swetha RaviKumar Bhagwat, FSR, explored energy access all over the world. She exposed the Public private partnership model (PPP): public and private actions to guarantee the poor citizens access to energy (management, service and utility innovation, integrate planning in grid connections etc.).

After the workshop, in a conversation with Stefan Bouzarovski, the issues of the Spanish social bond (Bono social) were discussed: from the partial application to the variable part of the electricity bill to the no effectiveness of the same. After talking to him about the Energy and Poverty Chair activities, a question was asked of Stefan: “How can Europe help the governments to extend and make effective these kinds of bond?”

Stefan: "Europe can suggest and promote to the member states actions to take to fight energy poverty but it cannot force governments to apply certain measures. The evidences of the European situation and the actions carried out by individual member states are shown in the EU Energy Poverty Observatory web site."